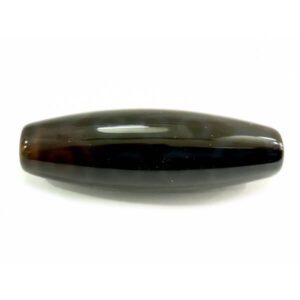 These Dzi Beads are on the same level of potency as the Nine Eyed Tibetan Dzi Beads and share the same level of popularity too – with these Beads, the beholder is believed to be able to reach a beautiful state of enlightenment, creating a formation of wishes to come true, enhancing recognition and awareness, increasing power of common and removing hardships.

Dzi beads (pronounced “Ji”, meaning “brightness”) are gemstone charms that are highly worshipped in Tibet and the Himalayas mountain range. Having been transferred from one generation to the next, over thousands of years, Tibetan culture highly reveres the Dzi beads and treats them as mystical charms. It is known as the “Heavenly Stone” by Tibetans, because of the legendary story of how the demi-gods discarded the Dzi Beads once they were scratched in the slightest way. There are many other legends and tales surrounding the powers of the Dzi beads lucky charms, which originate from Tibetan folklore.

These supernatural Tibetan charms boast beautifully engraved patterns and colors. The stones are of a dark hue and are often “agate” beads, stones that are found deep in the Himalayas. There are many different patterns that can be found on various Dzi beads; circles, squares, and waves are quite common. Those that possess rarer patterns are further steeped in mythical belief, such as the Dzi bead which depicts an outline of the five bats or tortoiseshell. Dzi beads are also imprinted with many “eyes”, to detect malicious intentions and repress them – there are many different numbers of eyes that can be seen on a Dzi bead, and each represents different meanings.

There are many mythical beliefs behind the powers of these good luck beads; these come from Tibet itself, which has always been a land of mystics and holy powers. The lucky charm beads can create an abundance of benefits, among which are prosperity, good fortune, health, and longevity. When the beholder wears the Dzi beads, they will adorn an “invisible cloak”, protecting them against evil forces, negative energy, and supernatural spirits. Diseases and untimely deaths are also avoided by the presence of this Tibetan charm – this is because they improve the immunity of the beholder by equalling out the body’s yin, yang, and five elements. In addition to this, the beholder will feel a greater sense of mind control, replacing the anger in their lives with a sense of calm and serenity.

Despite the fact that the Dzi beads belong to Tibetan origins, they can be worn by anyone to encourage a good aura and better karma. Because the beads represent a mythical meaning as opposed to a religious one, the race or religion of the wearer is of no concern.