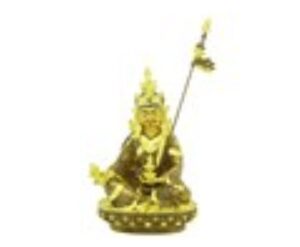 Display the 5 Inch Tibetan Padmasambhava Guru Rinpoche to brings education and academic luck to the household.

Padmasambhava (Sanskrit) is better known as Guru Rinpoche (“Precious Master”) or Lopon Rinpoche in Tibet. Padmasambhava is regarded as a major spiritual ancestor of all Tibetan Buddhists. Tibetans usually call him Guru Rinpoche, or Precious Teacher, and consider him as a second Buddha. He is highly revered in Tibet by all Buddhist sects. Padmasambhava’s ability to memorize and comprehend esoteric texts in a single hearing established his reputation as a master above all others. He is depicted here seated at ease with legs crossed on a lotus throne. He holds his Khatvanga staff with three severed heads denoting liberation from the three worlds. The right-hand holds a gold vajra. The left hand placed in the lap holds a long-life vase containing the nectar of immortality. He brings education and academic luck to the household.