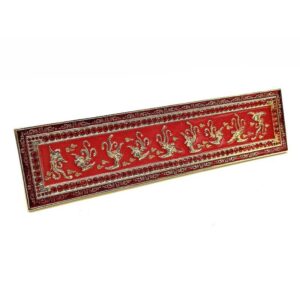 The #3 Quarrelsome Star is a Woodstar that can create havoc in one’s life, and this Nine Phoenix Plaque is a fantastic feng shui remedy for it.

The #3 Quarrelsome Star is a Woodstar that can create havoc in one’s life, and this Nine Phoenix Plaque is a fantastic feng shui remedy for it. In the year 2021, the #3 flies into the Southwest. This brilliant red and gold 9 PHOENIX plaque provides the Fire and Metal elements needed to quell the troublesome #3’s negativity effectively and quickly and keep argumentative or hostile energy under control.

A work of beauty, this Phoenix is a long-revered symbol of rebirth that brings hope, prospects, and opportunities to manifest in one’s life. It is one of the four celestial animals in the Chinese Legend and known as Feng Huang or “the king of birds.” The phoenix is associated with fire. In ancient China, it was believed that in times of peace and prosperity the phoenix would appear and so it is known as an auspicious symbol of luck and amity. It is the emblem most revered for serving the matriarch of the family or the strongest mother figure in the home so placing it in the Southwest is absolutely perfect in 2021 as this sector governs the luck of the matriarch and at the same time hosts the #3 Star.

The Sheep, Monkeys, and matriarch, in particular, are highly advised to bring this powerful Feng Shui cure into their homes in 2021, as would anyone whose front door faces the SW direction, or whose main door, study, or bedroom is in the SW. This is also highly recommended for anyone going through a legal issue or lawsuit.

In 2022, the #3 Flying Star flies into the East (affecting Rabbits) and in 2023 it invades Southeast (Dragon and Snake’s location).