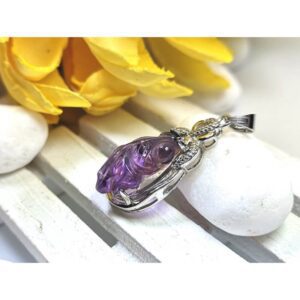 Beautiful Amethyst Gold Fish Crystal Pendant carved out of high-grade Amethyst quartz. Comes with a free stainless steel chain. It is said to have the potency to tranquilize the mind, removing the constant need for substance intake. Amethyst is a wonderful talisman for use in the creative arts.

Goldfish symbolizes prosperity and abundance in Chinese culture. During the 1620s, goldfish were highly regarded in southern Europe and symbolized good luck and fortune. It became a tradition for married men to give their wives a goldfish on their first anniversary, as a symbol for the prosperous years to come.

Amethyst, known as the “stone that heals”, is a semi-precious stone that has been known since ancient times to contain mystical properties of healing and spirituality. Amethyst is most well known for its healing effects. It is said to have the ability to rid the body of ailments of the mind, such as anxiety, stress, or depression. These diseases are often the root cause of other problems such as insomnia or uncontrollable anger. These disorders often affect one’s relationships with those around them, and so the use of Amethyst will also prove to improve personal connections and networking.

Amethyst is a wonderful talisman for use in the creative arts – It is often used as the Composer’s Stone, the Inventor’s, the Artist’s Stone, Poet’s, and Painter’s Stones. This stone also protects against paranormal harm, psychic attack, or ill-wishing. Amethyst is an excellent stone for business people, negotiators, and diplomats. It calms angry temperaments and gives a distinct advantage in situations where debating is required.

For those who suffer from addictions to various substances, Amethyst is reputed to be helpful as it’s said to have the potency to tranquilize the mind, removing the constant need for substance intake. Because of this highly desired property, this gem is often used to sustain sobriety and prevent further addictions, as well as to treat insomnia and relieve obsessive-compulsive disorder and hyperactivity in children. It’s also believed to clear your mind of any negative thoughts, instead of replacing your body with beneficial chi, to once again make you happy and healthy.

Crystal Pendant will be cleansed before shipment. It will be randomly selected to be sent as no two pieces are alike.