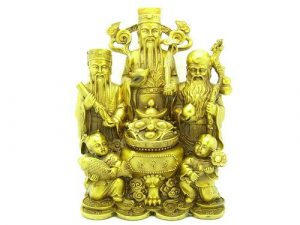 This is the best symbol-packed Fuk Luk Sau you could ever find! These beloved three-star deities are standing on a bed of coins and being accompanied by two children – a girl carrying a carp (symbol of prosperity and abundance) and a boy holding a Ruyi (symbol of power, also mean “as you wish”). In the center is a wealth bowl filled with overflowing gold ingots and coins to signify excellent wealth and fortune luck that lasts forever.

Brass Fuk Luk Sau with Wealth Pot and Children should be placed on a high side table, preferably at the height of eye view with a solid wall behind them in the dining room or living room from where they are said to create happiness and auspicious chi for the entire household and bring all kind of luck: wealth luck, descendant luck, health luck, career luck, business luck, and authority luck. Made from brass, this set of Fuk Luk Sau will last for generations. There is simply no reason to give this great item a pass!

What the Fuk Luk Sau symbolizes and how to use this symbol to enhance your Feng Shui: