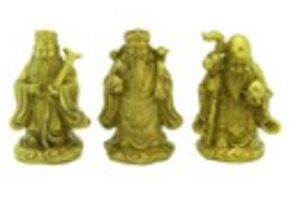 This petite set of Fuk Luk Sau is ideal for work desks and smaller spaces, even your car’s dashboard.

This petite set of Fuk Luk Sau is ideal for work desks and smaller spaces, even your car’s dashboard.

Brass Mini Fuk Luk Sau should be placed on a high side table, preferably at the height of eye view with a solid wall behind them facing the entrance in the dining room or living room from where they are said to create auspicious chi for the entire household. In the office, Mini Fuk Luk Sau can be placed behind you giving vital support and good fortune.

What the Fuk Luk Sau symbolizes and how to use this symbol to enhance your Feng Shui: