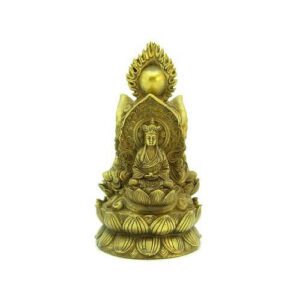 This beautiful brass figurine featuring the Lord Buddha, Kuan Yin, and Di Zang Wang Pusa seated peacefully upon a lotus throne will bring their followers all the blessings one can wish for.

This beautiful brass figurine featuring the Lord Buddha, Kuan Yin, and Di Zang Wang Pusa seated peacefully upon a lotus throne will bring their followers all the blessings one can wish for.

Gautama Buddha was a spiritual teacher in the ancient Indian subcontinent and the historical founder of Buddhism. He is universally recognized by Buddhists as the Supreme Buddha of our age. By tradition, he was born with the name Siddhārtha Gautama and, after a quest for the truth behind life and death, underwent a transformative spiritual change that led him to claim the name of Buddha. Buddha attained divine knowledge or “Bodhi” after six years of fasting and meditation. After enlightenment, Buddha shared his wisdom with all who asked.

Commonly known to Chinese Kuanyin as the Goddess of Mercy (or Kwan Yin, Quan Yin, Guan Yin), she is the most popular of the deity on Chinese altars, trusted and loved by all Chinese people. “One Who Hears the Cries of the World”, She hears those who call upon her and helps them even to lead them to the peace and happiness of the Western Heaven. Kuanyin is a savior with boundless compassion, a comforter of the sick, lost, senile, frightened, and unfortunate. The vase she is holding represents the compassion she pours out for all her followers. It is said that if you are in danger and you “concentrate on the powers of Kuan Yin,” you will be saved. Another way in which Kuan Yin can help those in need is if you are in want of a child. If you pray to Kuan Yin for a child she will grant your wish. To have a Kuan Yin picture or statue in your house brings good luck and protection to the household and family. Di Zhang Wang Pusa is shown carrying the symbol of the Cintamani or “Wish-Fulfilling Jewel” which has vast magical powers beyond description. He is wearing the robe of a Buddhist monk and on his head is the “Five leaves crown”.

Di Zhang Wang Pusa or Ksitigarbha Bodhisattva is often referred to, because of his vow to not achieve Buddhahood until “all the Hells are empty”, as the Bodhisattva of the Hell beings. Since there are always many souls in hell, Ksitigarbha has a lot of work to do! However, because of his great compassion, the bodhisattva still vowed to save them all. He does not want to see people being punished in hell and then committing still more crimes in their next lives. In addition to suffering souls in hell, the bodhisattva also helps living beings in other realms: humans, celestial beings, asuras, hungry ghosts, and animals and insects. He hopes that by teaching all these creatures, he will be able to stop them from committing more crimes, and thus help them to end their constant suffering. Di Zhang Pu Sa is very responsive to sincere prayers of faith. Those who have firm faith in him can easily receive his protection.