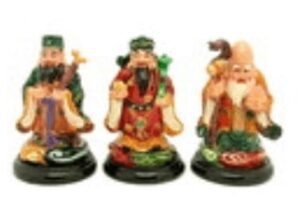 These colorful and life-like figurines of the much revered Fuk Luk Sau are intricately crafted from resin with careful attention to detail. The flowing regal robes and intricate adornment details combine to make this item a spectacular masterpiece.

Fuk Luk Sau, also known as the 3 Star Deities, Trinity Deities, or 3 Lucky Immortals, is the oriental version of the Three Wise Men. They personify the three important aspirations of mankind: Happiness/Prosperity, Success/Authority, and Health/Longevity.

Representing good luck, happiness, and prosperity, Fuk deity often depicted holding either a scroll, a child, or both. The child symbolizes the transmission of this good luck to future generations whilst the scroll of all wisdom represents high scholarship & intelligence. Luk deity wears the hat of a high mandarin official and carries a Ruyi, the scepter of power. He brings continuing abundance as the Chinese believe that power and wealth come together. Luk deity always stands in the center and ensures excellent career and business success. The third wise man, Sau, is depicted carrying a Dragon staff to fight illness caused by evil spirits. The Wu Lou tied to the staff, Peach in his right hand, and Sau character adornment, are of course all powerful symbols of good health, longevity, and immortality.

Fuk Luk Sau radiates boundless inner harmony and great warmth. Seldom missing from any Chinese home that believes in Feng Shui, the Chinese strongly believe that if you place the Fuk Luk Sau in a place of prominence in your dining and living room, they will bring you harmony and continuous good fortune for the household. These Star Gods are rarely worshipped at an altar. They are regarded more as symbolic representations than as deities and thus have little religious significance.

Invite the Colorful Fuk Luk Sau 3 Star Deity into your home or office and place them in a high and respectful place. Besides being a magnificent showpiece, the Three Star Deities will bring you the prized gifts of happiness, wealth, and health.

Check out our collection of Deities and Guardians to suit your personal taste and requirements.