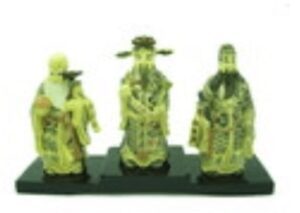 Place the Dining Set Fuk Luk Sau in a place of prominence in your dining and living room, they will bring you harmony and continuous good fortune for the household.

This absolutely beautiful and lovely set of Fuk Luk Sau is hand-crafted from resin to imitate ivory. The quality of the craftsmanship and finishing is outstanding. It comes with an elegant wooden stand. Ideal for your dining room or business premises. The Dining Set Fuk Luk Sau is not mass-produced and comes in limited quantity only. You can find an engraved signature of the sculptor who made them on the bottom of each of the deities.

Dining Set Fuk Luk Sau should be placed on a high side table, preferably at the height of eye view with a solid wall behind them in the dining room or living room from where they are said to create auspicious chi for the entire household. At the office, Dining Set Fuk Luk Sau can be placed behind you giving vital support and good fortune.

Representing happiness and harmony, Fuk deity carries a scroll and sometimes children with him for good descendant luck. Luk deity holds a scepter of office called Ru Yi to symbolize prosperity, authority, and wealth. Luk deity always stands in the center and ensures your career success and enhanced income luck. Sau deity is depicted as carrying a staff with a gourd containing the Elixir of life tied on it and a peach, also known as the fruit of immortality. He symbolizes good health and longevity.