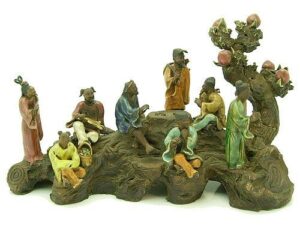 Having the Eight Immortals on Peach Tree in your office or home will emanating plenty of auspicious health and wealth energies into your space.

This artistic figurine of Eight Immortals (Ba Xian) depicted spending their leisure time under a peach tree of longevity is skillfully hand-sculpted out of Shiwan ceramic by a professional art master from Shiwan, China. This figure demonstrates the superb skills of its sculpture and is characterized by its life-like and human warmth expressions.

Legend has it that the Eight Immortals were sent down from heaven to assist and guide mortals in achieving their goals and ambitions. Having the Eight Immortals on Peach Tree in your office or home will ensure you have their backing in your endeavors and at the same time emanating plenty of auspicious health energies into your space.

This is a work of art made to impress. Absolutely worth collecting, perfect for oriental art collectors and Feng Shui enthusiasts with an eye for beauty, class, and quality! A masterpiece that makes an outstanding gift too.

What the Eight Immortals symbolizes and its Application in Symbolism Feng Shui:

The Eight Immortals are superior beings worshipped by Taoists and widely regarded as symbols of longevity and good fortune in Feng Shui study. Comprising six men and two women, legend has it that they were sent down from heaven to assist mankind in their time of need and achieve their ambitions and aspirations to gain good wealth, fame, health, and knowledge. Each immortal possesses a tool of power that can perform supernatural magic. The symbolic presence of the Eight Immortals in your home is believed to bestow good health, happiness, and good fortune on every member of your family especially in this Period 8.

Shiwan has a long history of ceramic sculpture, with many vivid works by generations of craftsmen. Shiwan’s ceramics technique was shaped in Tang and Song Dynasties and flourished during Ming and Qing Dynasties. Shiwan’s 5000-year-long ceramic making history has accumulated the rich and abundant ceramic culture, and won the high prestige of the “Capital of Ceramic in South China”. The potters of Buy-Fengshui.com’s Shiwan ceramic range are highly skilled artisans who have inherited and developed the exquisite tradition of Shiwan ceramic techniques from their forefathers.

Shiwan ceramics is without question far superior to any other ceramic and porcelain sculptures in terms of its multifarious techniques, modeling, vivid and realistic expression, and rich colorful glazes and painting. Shiwan ceramic artists will usually leave the flesh areas (face and hand) of the figurine unglazed, resulting in a more detailed and warm human expression, bringing life to their creation. This is a characteristic that distinguishes Shiwan ceramics.