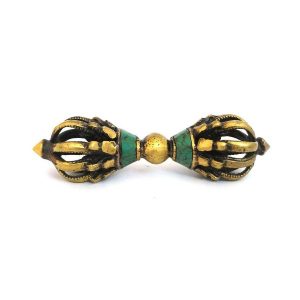 The Dorje is a Tibetan word and also called Vajra in Sanskrit, which means diamond or thunderbolt. It can be used to overcome the #3 Quarrelsome or Hostile Star.

In Buddhism, the Dorje is the symbol of Vajrayana, one of the three major branches of Buddhism.

The Dorje is a Tibetan word and also called Vajra in Sanskrit, which means diamond or thunderbolt. This is because it symbolizes a tool, as hard as the diamond or as powerful as the thunderbolt, that can cut through ignorance, delusion, greed, anger, and impurities of the mind. It is also believed to represent firmness of spirit and spiritual power. It is a ritual tool or spiritual implement which is symbolically used by Buddhism, Jainism, and Hinduism, all of which are traditions of Dharma.

The Dorje is often used together with a bell during ritual and meditation, often at the start of a chanting session to clear the mind and create focus. Always hold the bell in the left hand and the Dorje in the right. Ring the bell with your left hand or you can also strike it with the Dorje. The sweet sound of the bell resonates through the air, clearing the space and creating harmony. In Feng Shui, a Dorje can be used to overcome the #3 Quarrelsome or Hostile Star.