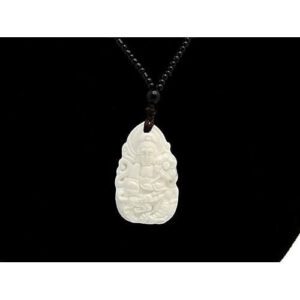 If you are a Dragon person, make sure you enjoy the protection of your guardian deity by wearing or having the Samanthabhadra Pendant.

Each zodiac has designated a deity who will offer special attention and help to the particular zodiac to provide great power in clearing obstacles and inviting wealth from endless resources. The Dragon’s guardian deity is Samanthabhadra whose miraculous energy helps eliminate disasters, lighten problems, attract good fortune and bring good health. No effort will be spared to look after the well-being of the Dragon who falls under her special protection and guardianship.

This is a lovely emblem of Samantabhadra or the Bodhisattva Universal Virtue (known to the Chinese as Pu Hsien) who is the personification of love, sacred activity, virtue, diligent training, and patience. It is carved from pristine white coral which is considered magical in the realm of crystals and gemstones, associated with emotional healing and protection. In the Chinese Pantheon, she is seen with Kuan Yin (Compassion) and Wen-Shu (Wisdom) as the Three Precious Bodhisattvas whose qualities make up the Buddha’s Essence. In many Japanese and Chinese temples she is also found with Wen-Shu Pusa (Manjusri) flanking Sakyamuni Buddha to form the Shakyamuni trinity. Where Mañjuśrī is associated with wisdom, Samantabhadra is associated with the action. She is the patron of the Lotus Sutra and is thus often depicted seated on a white elephant holding a lotus flower or a scroll or book, a picture of serenity and benevolence, ever ready to answer the calls of those who need her assistance. As befitting the protector/charge relationship, the Dragon is shown in complete repose at the foot of Samanthabhadra, calm and relaxed, knowing that he is being watched over by heavenly eyes.

If you are a Dragon (what is my Chinese zodiac?), make sure you enjoy the protection of your guardian deity by wearing or having the Samanthabhadra Pendant near you at all times. You may also display the amulet in the South East or keep it together with personal belongings.

Browse through our wide range of Feng Shui Jewelry and Auspicious Amulets for protection and blessings.