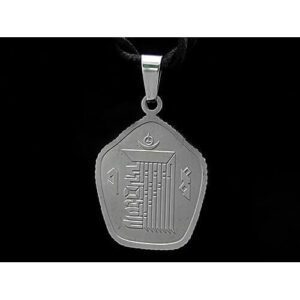 This powerful pendant features the Kalachakra symbol on one side and the HUM seed syllable on the other.

This powerful pendant consists of a beautiful stainless steel medallion strung on a strong black cord. It features the Kalachakra symbol on one side and the HUM seed syllable on the other – both of which have formidable protective qualities.

The word Hum represents the trinity of heaven, earth, and mankind and is used in many sacred mantras including the powerful Om Mani Padme Hum. Being the seed syllable of Akshobhya- the immovable, it holds both wisdom and method and this cannot be broken or divided. This sacred syllable is believed to protect one from harm and help overcome affliction, conquer fear and generally lead a good life.

Kalachakra, literally “Time Wheel” in Sanskrit, is one of the most powerful symbols of protection from Tibet. The Kalachakra seed syllable or the “Sign of the Ten Mighty Ones” is the best-known symbol of the Kalachakra system that has a very important place in Tibetan Tantric tradition for many centuries. The interlocking body of this mystical monogram is composed of seven syllables (Ham Kesha Ma La Va Ra Ya), beautifully stylized in Lantsa script. These seven syllables are crowned with the symbol of the sun, crescent moon, and dissolving flame, making a total of ten very powerful elements within the image. This gives rise to the Kalachakra mantra of Om Ham Kesha Ma La Va Ra Ya Sva Ha where sun, moon & flame is represented by Om whilst Sva Ha or Soha which means something like “amen” or “so be it” is commonly used to end a mantra. Keep this “Tenfold Powerful Ones” or “The One with Ten Powers” symbol close to you for good fortune and protection against untimely death and harm from evil spirits.

The metal makes of this item also doubles it as a formidable Metal Cure to weaken the malignant #2 Black and #5 Yellow Stars. Metal cures are often used to ward off evil influences.

Invoke the protection of the powerful Kalachakra and Hum symbols to ward off negativities by wearing this charming talisman. Besides being an elegant accessory, the Kalachakra Symbol with Hum Syllable Pendant works as a powerful Feng Shui lucky charm and to protect you not only while you are at home or at work but also the rest of the time wherever you go.

Check out our full range of Feng Shui Jewelry for protection and blessings.