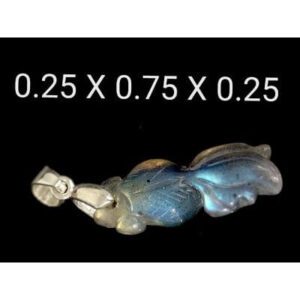 Goldfish in Gold Fish Crystal Pendant symbolizes prosperity and abundance in Chinese culture. During the 1620s, goldfish were highly regarded in southern Europe and symbolized good luck and fortune. It became a tradition for married men to give their wives a goldfish on their first anniversary, as a symbol for the prosperous years to come.

Labradorite is an instantly recognizable stone with a stunning sheen and gorgeous play of colors. Its beautiful color and flashes of light are so spectacular that the Inuit people believed that the stone was the Northern Lights captured in the rocks.

Labradorite is a very fascinating and protective crystal. It can protect you from ill will and block negative energies from entering your aura and at the same time prevent positive energy from leaking out of it while bringing out the positive aspect of your character.

This mystical stone removes insecurities and fears and helps to restore and strengthens one’s faith in the self. If you have an overactive mind that can’t seem to stop thinking or analyzing unnecessarily, Labradorite can tame that. With a calmer mind, you will enjoy a heightened sense of awareness and also will sleep better.

This crystal also helps develop enthusiasm, stimulate the imagination and fire it up with ideas and creativity. Labradorite is an excellent stone used to sharpen intuitions and dispel illusions.

As a workplace stone, Labradorite brings out the best in people, making work life more congenial.

It assists in reducing anti-social, reckless, or impulsive behavior in children, teenagers, and adults who are easily led into trouble by others, and may aid in detoxifying the effects of tobacco, alcohol, and to a lesser degree, hard drugs.