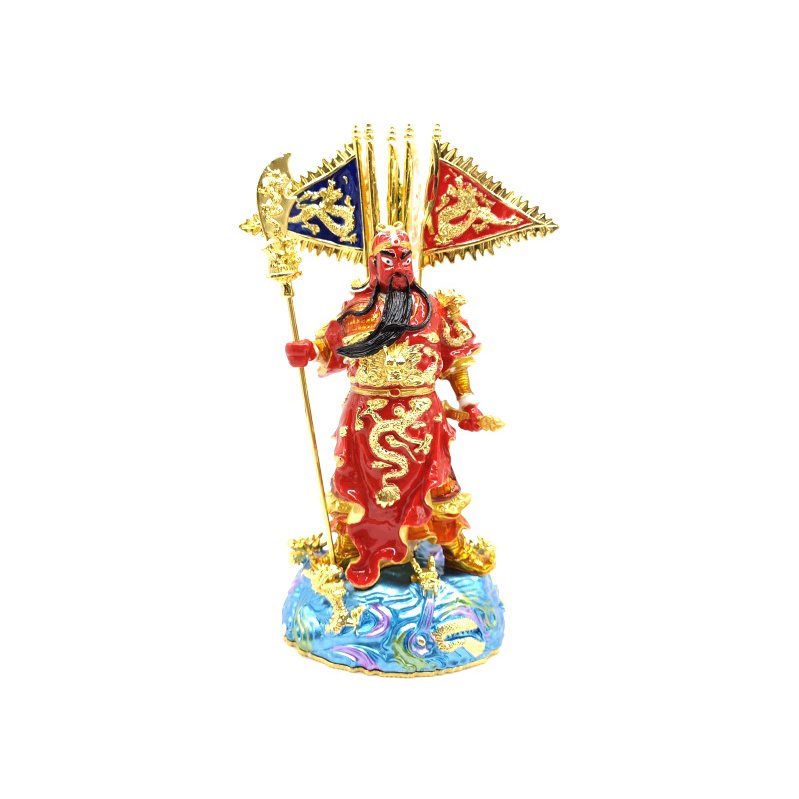 Kwan Kung With 5 Flags statue is the most powerful for attracting good fortune energies, protection against evil forces, and political advancements.

A magnificent statue of Kwan Kung in the most prestigious form! Revered by the Chinese as a God of War, as well as the God of Wealth, this mighty Kwan Kung statue is standing majestically holding his formidable weapon – the Dragon blade (Guan Dao) in his right hand and a sheathed sword in his left. He is also accompanied by several Dragons at his foot, making this impressive Kwan Kung statue the most powerful for attracting good fortune energies, protecting against evil forces, energizing family achievements, inviting more helpful people, countering inauspicious stars, and enhancing business and political advancements. The 5 victory flags adorned with images of good fortune Dragons represent that victory will come to you!

This exuberant statue of Kwan Kung with a red face is impeccably presented and is highly desired among both Feng Shui practitioners and art enthusiasts. In the year of the Rabbit 2023, use the Kwan Kung image to awaken the Warrior Star brought by the Paht Chee chart. This Star enables you to achieve success by overcoming any competition or obstacles that may get in your way. Display the Magnificent Kwan Kung With 5 Flags in a prominent area of your home or office where you can see his image daily.

Kwan Kung (Guan Gong, Kuan Kong), originally known as Guan Di, was one of China’s most prominent and successful war heroes. After many achievements, he was titled God of War or Saint of War and bestowed with his new name (which is known to people today). He is also renowned as the Patron Saint of the Police, the Guardian Deity of the Triads, and the “Great Protector” of politicians, business leaders, and the Armed Forces. He is the bestower of justice, defending the innocent and revered by the righteous. His use is highly recommended by Lillian Too, famous Feng Shui grandmaster and author, as he even has the power to protect against thieves and supernatural spirits. In Hong Kong, one can see a shrine of Kwan Kung at every police station.

Because of his strong history as a major war lord and guardian, Kwan Kung is a desired symbol by businessmen; he protects against betrayals of any kind, and imbues the warrior spirit, helping those who need to navigate competitive, cutthroat or hazardous situations. When Kwan Kung is placed at the front reception desk facing outside, he is believed to protect your establishment from embezzlement and betrayal. In addition to this, he is said to give you the courage to take risks, try new things, and move forward with new ideas, while protecting your flank against rivals.