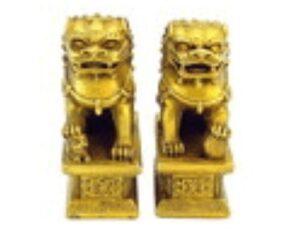 This pair of Majestic Brass Fu Dogs for Protection widely known as the protector that wards off evil influences and spirits.

This pair of beautiful heavenly guardians are lovely to own. Widely known as the protector that wards off evil influences and spirits, the Fu Dogs can act as your loyal pet to protect everyone they are guarding in the abode against harm.

Here is how you can use the Majestic Brass Fu Dogs for Protection to Feng Shui your way to a better life:

1. Position a pair of Majestic Brass Fu Dogs for Protection fairly high at the main door facing outward to safeguard your home or office against evil influences, and even theft. The male (the one with the ball) on the left side of the door (inside looking out) and the female on the other side. You can also place them on a small table opposite your main door.

2. In Flying Star Feng Shui, the Majestic Brass Fu Dogs for Protection can be used to ward off the evil influences of the #5 yellow star and #2 black star. The #2 black star is also known as the ‘Sickness Star’ which brings illnesses and ailments to occupants while the #5 yellow star is the ‘Disaster Star’ that instigates fights, accidents, and disputes. Placing the Majestic Brass Fu Dogs For Protection in the affected sectors will dilute these adverse energies.