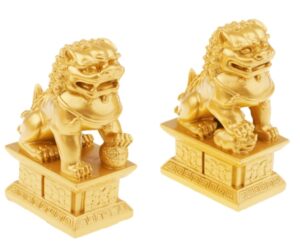 Position a pair of Chinese Lions fairly high at the main door facing outward to safeguard your home or office against evil influences.

This pair of ferocious-looking yet devotedly loyal heavenly guardians is an absolute must-have for any home or office premises. The Chinese Lions can act as your loyal pet to protect everyone they are guarding against harm.

The Male Lion is shown playing with a ball while the Female has its claws on the belly of a baby-lion. The Male Lion stepping on a ball/globe represents authority and command (literally having the world at your feet!) while the Female Lion resting her foot on her cub symbolizes protection and loyalty. Always place the male on the left and the female on the right (inside looking out).

What the Chinese Lions symbolizes and its Application in Symbolism Feng Shui:

Chinese Lions or Fu Dogs, normally seen as a pair, are mythical animals and guardians of the heavenly gate. They have fear-inspiring faces and muscular bodies and are believed to be protectors that ward off evil influences and spirits. Since ancient times, the protective guardian Lions were placed in front of all the palaces and temples. Today, one can see them at the entrances of restaurants, banks, hotels, malls, and shops. It is their task to probe the mind and intentions of the entering guest. It is said that people with good thoughts can pass by the Lions unhindered, but they see through bad people and refuse them entry. The Chinese Lions also nourish Chi that enters the home or business premises and thus bring in good fortune.

Here is how you can use the Chinese Lions to Feng Shui your way to a better life:

1. Position a pair of Chinese Lions fairly high at the main door facing outward to safeguard your home or office against evil influences, and even theft – the male (the one with the ball) on the left side of the door (inside looking out) and the female on the other side. You can also place them on a small table opposite your main door.

2. In Flying Star Feng Shui, the Chinese Lions can be used to ward off the evil influences of the #5 yellow star and #2 black star. The #2 black star is also known as the ‘Sickness Star’ which brings illnesses and ailments to occupants while the #5 yellow star is the ‘Disaster Star’ that instigates fights, accidents, and disputes. Placing the Chinese Lions in the affected sectors will dilute these adverse energies.

Check out our extensive collection of Chinese Lions for protection and success.