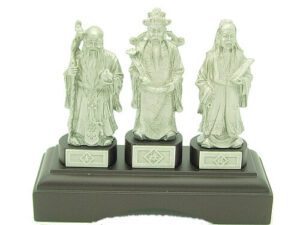 This absolutely stunning set of Fuk Luk Sau is made of high-grade pewter. The quality of the craftsmanship and finishing is outstanding. It comes with an elegant wooden stand. Ideal for work desks or counters in offices and business premises.