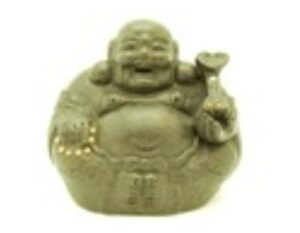 Place the Purple Clay Sand Zisha Laughing Buddha Holding Ruyi in the Northwest to favor patriarch luck or Southwest to benefit the matriarch.

This is a beautiful representation of the Laughing Buddha for those seeking good authority luck. He is depicted holding a Ruyi for power on one hand and a rosary bead on the other. This Laughing Buddha is made of purple clay or Zisha – a fine-textured and porous material found only in Yixing, China.

Laughing Buddha is also known as Buddha of Happiness or Matreiya in Buddhism. Legend has it that nothing would make this Buddha happier to see people’s problems, worries and sadness transform into happiness. It is said that his inner smile is so strong that it radiates throughout his entire face. He brings happiness wherever he goes. The Laughing Buddha is a well-known symbol of wealth, happiness, innocent, and contended joy; just looking at his jolly face will cheer you up. It is believed by rubbing his belly, which is said to contain much wealth, will bring good luck and prosperity to all in the home, and the bigger his round tummy, the more auspicious the image. This wonderfully jolly deity is one of the most beloved Buddha images he can be seen in almost every Chinese household and restaurant throughout the world. The Laughing Buddha is also known as the Buddha of Wealth, usually depicted carrying wealth symbols such as pots of gold, large ingots, and a sack believed to contain treasures. He sometimes carries a “Wulou” (gourd), a symbol of good health and longevity.

Place it in the Northwest to favor patriarch luck or Southwest to benefit the matriarch.

The Laughing Buddha can practically be placed in any part of the home or office or even in the car except in the toilet areas and kitchen.