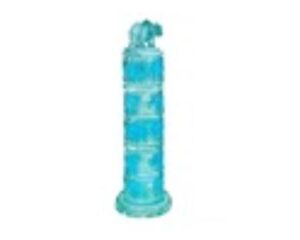 The Rhino & Elephant Anti Burglary Totem serves as a powerful talisman for protection especially against the violent effects of the #7 Flying Star.

This is a striking Anti-Burglary Totem feature of two of the most protective animals in Feng Shui – the Elephant and Rhinoceros. In this powerful amulet, the Blue Rhinoceros stands tall at the top of a lovely translucent blue totem pole with images of Rhinoceros and Elephant all around. The Blue Rhinoceros and Elephant is a powerful talisman to protect against fighting, robbery, stealing, accidents caused by the #7 Flying Star. They have attained these attributes due to their formidable strength and size in the animal kingdom as well as their protective and resilient nature.

The influence of the Elephant on mankind has always been fascinating, enchanting, and charming. The role of the elephant in myth, legend, religion, history, folklore, and war, has made it a symbol of splendor. In Feng Shui, the Elephant is considered a sacred symbol. Although it is often used to symbolize strength, power, wisdom, strength, and fertility, it can also be used to symbolize longevity, good luck, and success. It can act as the grantor of wishes and as the protector of the household. The image of an elephant with a trunk up is especially auspicious as it symbolizes triumph over the evil energy and also as a powerful protector.

The Rhinoceros is a powerful symbol of protection against robbery, accidents, office politics, backstabbing, and enemies as well as to counter the violent #7 star in Period 8. The #7 is a much-feared star that brings burglary, fatal accidents, bloodshed, and conmen into your life. Feng Shui masters recommend using the mighty rhinoceros for protection because this particular animal is hardy and tough and can definitely counter any other fierce animals or obstacles in its own way.

Given its powerful symbolism, be sure to benefit from the protective and beneficial energy of the Rhino & Elephant Anti Burglary Totem by displaying it prominently in your home or office. Display the pair near the main entrance or place it in an elevated position in the afflicted sector. Besides being a magnificent showpiece, the combined energies from the powerful symbols will bring you abundance, longevity, fertility, peace, harmony, authority, good luck, and success, and most importantly, guard you against harm.

Check out our wide selections of Elephants and Rhinoceros for protection against the violent #7 Flying Star.