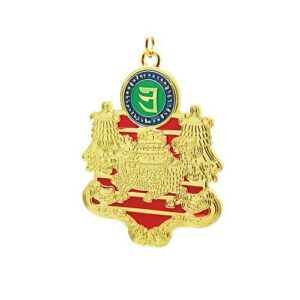 Keep the Wealth and Success Key Ring Amulet with you all the time to increase your prosperity luck and prevent losses.

This auspicious key chain amulet features the image of the Chi Lin loaded with treasures on one side and heaps gold ingots on the other. Both sides are flanked with the Victory Banner and magic Ru Yi for good measure.

The Chi Lin, also known as Kei Loon or Qi Lin, is the Chinese Unicorn, a legendary creature with the head of a dragon, scales of carp upon the body of a horse, and a tail consisting of little curls. It is sometimes called the dragon horse, a mythical creature that has a lot of legends and stories associated with it. One legend has it that they were originally guardians of the gates of heaven. The Chi Lin’s presence is said to attract the powerful cosmic breath of the dragon, which promises good omens, wealth, success, longevity, wisdom, compassion, and distinguished children. The magnificent Chi Lin is believed to have great protective abilities.

One of the most ubiquitous Buddhism symbols, the Victory Banner (also known as Dhvaja), was adopted by Buddhism as one of the Eight Auspicious Objects. It is a powerful symbol of triumph- the victory of the Buddha’s teachings, enlightenment, and wisdom over ignorance. Display it in the center of your home or office to help you triumph over evils, obstacles, obstructions, enemies, competitions, disagreements, problems, and disharmony. It is also an excellent symbol for wealth recovery, ideal for people who have gone through a very bad time financially. In Feng Shui, it is used to represent success in career and triumph in all areas of life including business pursuits and examination.

The Ru Yi is one of the most powerful symbols of power, leadership, and authority. Also known as the scepter of power, the Ru Yi was a tool for high-ranking officials of Imperial China in ancient times. They were usually made of precious gems such as jade or gold cloisonné. This symbolic item is also carried by Luk, one of the three-star deities Fuk Luk Sau which represents abundance and wealth. The deity ‘Tua Peh Kong’ carries one too.

Keep the Wealth and Success Amulet with you all the time to increase your prosperity luck and prevent losses. Hang it on or pop it in your bag. Dangle it on the rearview mirror of your car so that your personal ‘guardian angel’ is always there with you, to protect you from harm and bring you good luck. This way, the special amulet can work as a Feng Shui lucky charm and protect you not only while you are in your house or at work but also the rest of the time and wherever you go.

Check out our wide range of Auspicious Amulets and Feng Shui Wealth products for protection and blessings.