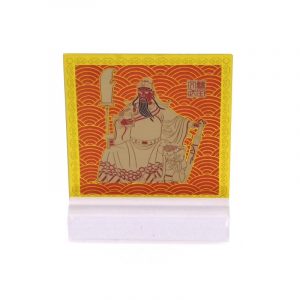 This mini Feng Shui plaque features the Kwan Kung, the God of War and Wealth with the Amulet Against Defeat of the reverse side.

This mini Feng Shui plaque features the Kwan Kung, the God of War and Wealth with the Amulet Against Defeat of the reverse side. The most famous military General in Chinese history, the Kwan Kung is seen in a wisdom posture – sitting and reading a book. Looking calm and focus on the book, unknown to many people, Kwan Kung is also known as a God of Literature. He is believed to enhance literary luck, academic luck, wisdom, improve decision making, heighten analytical skills and enhance competitive advantage. Very suitable for politicians, military officials, leaders, engineers, lawyers, doctors, lecturers, and students sitting for examinations. He can be displayed in the study, office, or living room. The Wisdom Kwan Kung Mini Plaque makes a great Feng Shui enhancer on your work desk to enhance one’s talent and creativity, and to boost command and authority luck. The Dakini amulets help ensure strengthen your luck in any commercial battle or business negotiation.

Kwan Kung (Guan Gong, Kuan Kong) is the powerful and mystical Chinese god of war. The Kwan Kung offers both status and protection to those who invite him into their homes or places of work. His presence is highly desired by businessmen and those seeking protection and justice.

The origination of the powers of Kwan Kung comes from a tale of China’s most powerful warrior. His name was originally Kuan Di and he was a hero both on the battlefield and at home in his country. After many victories and heroic deeds, he became known as a sacred protector to emperors, politicians, businessmen, and his armies. He was granted the name Kwan Kung or god of war for his many honors.

Kwan Kung is known to defend the guiltless and the righteous, being endowed with the power to bestow justice.