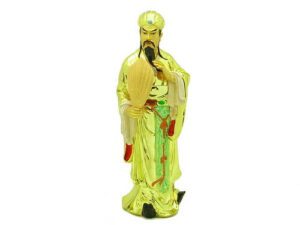 Chu-Ge Liang was a famous strategist and statesman of the Three Kingdoms Period (220-280 AC). Regarded as one of the most gifted historical figures ever existed in China, Chu Ge Liang was famed for his unsurpassed intelligence, vast wisdom, philosophies, and military strategies.

Chu Ge Liang, the great war expert of his time, had won countless battles for his emperor. The most impressive one was when he was tasked to defend the fort against a much more superior enemy in terms of number as well as training. The deception was used. Chu Ke Liang sat at the main gate, drank tea, and had musicians for entertainment. The approaching force stopped at the gates and refused to advance as the generals were worried about Chu Ge Liang’s calmness and confidence. They retreated and the fort was saved, without a single drop of bloodshed.

Depicted carrying a feathered fan, the presence of the figurine of Chu Ge Liang signifies victory and ensures you triumph over all your competitions, be it a promotion or a project idea. He will open your mind to possibilities you thought were beyond your reach. Chu Ge Liang will alert you to new ideas, new ways to outrival your business competitors.

Display the Golden Chu Ge Liang in the study room or office. You can also place him in the North-East sector of a bedroom to embellish the occupant’s educational and literary luck. The North East is the universal corner of education and knowledge, according to the Pakua Life Aspiration Theory.

Perfect for corporate leaders, investors, businessmen, managers, or any job where foresight to predict your opponent’s next move is crucial.