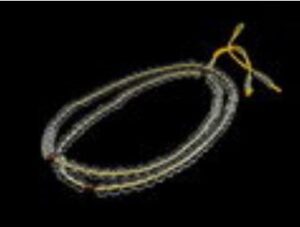 This is a Buddhist prayer Mala or beads made of Clear Quartz used when reciting, chanting, or mentally repeating a mantra or the name or names of a deity.

This is a Buddhist prayer Mala or beads made of Clear Quartz used when reciting, chanting, or mentally repeating a mantra or the name or names of a deity. Clear Quartz is known as the “master healer” which draws off negative energy of all kinds, balances and revitalizes the physical, mental, emotional, and spiritual planes, and aids concentration, and unlocks memory.

The overall purpose of all Mala beads is to create a sense of tranquility and inner-peace for not only the individual but for the community as a whole. In reciting the prayer, ‘toxins’ will leave and a sense of peace will enter making an individual that much closer to reaching nirvana. Traditionally, there are 108 beads on a strand of Buddhist Mala prayer beads. The origin of this sacred number is related astrologically to the 12 astrological houses, multiplied by the 9 planets in our solar system. This number is significant because it represents the number of mental conditions or sinful desires that one must overcome to reach enlightenment.

Buddhist prayer beads are used by moving it through your fingers beginning at the first bead after the Guru bead. Each time you recite one compete mantra you then cross to the next bead. Once you have gone one round across the Mala and reach the Guru bead you reverse the direction. Most people hold the belief that you do not cross over the Guru bead as a sign of respect or a good attitude of mind towards a spiritual teacher. Doing so is akin to symbolically stepping over one’s teacher.

Keep the Buddhist Mala off of the ground, as is the case with all sacred objects, including books and other ritual instruments of spiritual practice. If the Mala falls on the ground, touch it to the crown of your head while reciting, Om Ah Hum, three times. The Mala should not be worn while bathing or allowed to get wet, as this may weaken the cording which the Mala is strung with. It would be wise to remove your Buddhist Mala before retiring at night or while sleeping, as stress can be exerted on the cording which may cause it to break.

This crystal product will be cleansed of negative energy by using the singing bowl before shipment to empower it with positive Sheng Ch’i.

Check out other Buddhism products for protection and blessings.