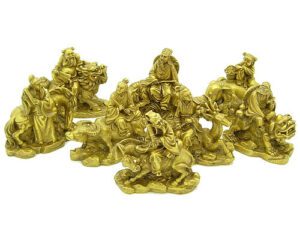 This is a set of eight immortals depicted holding their magical objects and sitting on auspicious animals.

This is a set of eight immortals depicted holding their magical objects and sitting on auspicious animals.

Legend has it that the Eight Immortals were sent down from heaven to assist and guide mortals in achieving their goals and ambitions. They bring good fortune, good descendant luck, good education luck, longevity, wealth, and fame. Each of the 8 Immortals will guard one of the eight directions and hence ensures all-around good feng shui. Having this absolutely stunning-looking Eight Immortals with Auspicious Animals in your office or home will ensure you have their backing in your endeavors, not to mention catching lots of admiring eyes.

The Eight Immortals with Auspicious Animals makes the perfect gift for anyone with strong ambitions and big goals in life. They can be placed in any direction in your home or workplace.

The Eight Immortals are superior beings worshipped by Taoists and widely regarded as symbols of longevity and good fortune in Feng Shui study. Comprising six men and two women, legend has it that they were sent down from heaven to assist mankind in their time of need and achieve their ambitions and aspirations to gain good wealth, fame, health, and knowledge. Each immortal possesses a tool of power that can perform supernatural magic. They are imbued with the power of being visible and invisible at pleasure, of raising the dead, of changing stones they touch into gold, and of effecting at pleasure various other wonderful transmutations. The symbolic presence of the Eight Immortals in your home is believed to bestow good health, happiness, and good fortune on every member of your family especially in this Period 8.

First immortal – Chung-Li Chuan considered the chief of the immortals, always carries a magical fan and sometimes a peach. He is said to have discovered the Elixir of life and possessed the power to cure the sick and revive the dead. This immortality is a symbol of and longevity. He is shown sitting on a Chi Lin in this set.

Second Immortal – Chang Kuo-Lao, is represented as an ‘Old’ man with mystic powers who carries the bamboo tube and riding a mule that could carry him a thousand miles a day. He’s a symbol of wisdom and used to help childless couples conceive. He is shown sitting on a Horse in this set.

Third Immortal – Lu Dong-Pin, is a Taoist scholar with a magic sword used to slay demons and evil spirits. He’s also shown with a fly-whisker that cures illnesses. This immortal symbolizes scholastic luck and protection. He is shown sitting on a Tiger in this set.

Fourth Immortal – Ts’ao Guao-Chiu, is the finest dressed of the Eight immortals. He’s generally shown with castanets or a jade tablet of admission to court, and sometimes a feather fan. Said to have been connected with the Sung Imperial family, he signifies fame and recognition. He is shown sitting on a Horse in this set.

Fifth Immortal – Li T’ieh Guai (Iron-crutch Li), is depicted as a beggar with a crutch and a gourd (Wulou). Believed to be the most powerful of the Eight, he bestows wisdom. He is shown sitting on a Fu Dog in this set.

Sixth Immortal – Han Hsiang Tzu, is the happy immortal often shown carrying a flute, which he is usually represented as playing. He brings healing energy to the occupants. He is shown sitting on a Bull in this set.

Seventh Immortal – Lan Tsai Ho, often shown wearing a blue robe and carrying a basket of flowers. She brings luck to young women. She is shown sitting on an Elephant in this set.

Eight Immortal – He Hsien Ku, carries with her a magical lotus blossom and a fly-whisk, she’s called the Immortal Maiden. She is a symbol of family and marriage luck. She is shown sitting on a Deer in this set.

1. Display figurines of the Eight Immortal in East part (Health and relationship corner based on Pakua’s 8 Life Aspirations Theory) of a room where everyone in the family members usually gathers together such as the living room or dining room. This will bring good health, abundance, and happiness to everyone.

2. Place the Eight Immortals in your personal Sheng Chi corner of office based on your Kua Number (8 Mansions Theory) your office to generate good fortune and provide protection