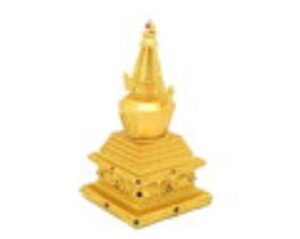 Display the Buddhist Amitabha Stupa in the center of your home so that its sacred radiating presence can transmit blessings of peace and harmony to everyone in the family.

This is a stunningly beautiful replica of a Buddhist Amitabha Stupa to overcome all kinds of bad afflictions brought by the year’s bad flying stars. Crafted from brass with brilliant gold plating and accented with colorful crystals and an image of the Buddha, the Stupa can transform and revitalize the energy around you. It has a secret compartment with which can be filled with earth materials such as sand or crystal chips, or even use to store your favorite mantra.

A Stupa is a pyramidal or dome-like form Buddhist monument created over sacred relics of the historical Buddha or other saints or venerable persons. As such, Stupas have been built and revered by millions of people worldwide as magical objects with miraculous powers. The word Stupa is a Sanskrit word that literally means “to heap” or “to pile up.” There are three representations of the Buddha – body, speech, and mind. Actual statues are representations of Buddha’s holy body. The scriptures represent Buddha’s holy speech. And stupas are the representation of the Buddha’s holy mind; hence they are also described as “the embodiment of wisdom”.

Symbolically, the Stupa embodies a complex range of iconographic meanings, with each of its components representing a specific aspect of the path to enlightenment. The base of the Stupa is fashioned in the form of a many-stepped throne or plinth, known as a ‘lion’s throne. Above this ascend the Stupa’s hemispherical dome, a square chamber or Harmika, an upper spire composed of up to thirteen ‘umbrella wheels/disks’, and a crowning finial of a lotus-umbrella, crescent moon, sun disc, and dissolving flame/jewel.

Just to see a Stupa, or walk around it mindfully is a very powerful way to purify negative karma and obscurations, and to accumulate extensive merit. Display the Buddhist Amitabha Stupa in the center of your home so that its sacred radiating presence can transmit blessings of peace and harmony to everyone in the family.

Check out other Buddhism products for protection and blessings.