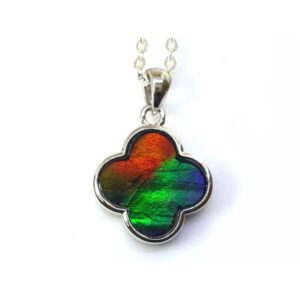 This stunningly iridescent 3A high-grade ammolite 4-leaf Clover pendant with a wide range of dazzling colors and patterns, set in a 925 sterling silver frame, capped with optical quartz is a highly desired jewelry piece.

This stunningly iridescent 3A high-grade ammolite 4-leaf Clover pendant with a wide range of dazzling colors and patterns, set in a 925 sterling silver frame, capped with optical quartz is a highly desired jewelry piece.

Ammolite is derived from the fossilized shells of extinct ammonites (ancient sea creatures). It has been buried over 100 million years absorbing a substantial amount of both the Earth’s and the universe’s positive cosmic energy. Just think of the energy an ammonite holds! For feng shui purposes the colorful ammolite has more power!

This rare and valuable opal-like organic gemstone is found primarily along the eastern slopes of the Rocky Mountains of the United States and Canada. It is arguably the rarest gemstone on earth, rivaling the rarity of such gemstones as alexandrite and red diamonds. In 1982, ammolite was given official gemstone status by the World Jewelry Confederation, the same year commercial mining of ammolite began.

Although the terms ammolite and ammonite are sometimes used interchangeably, ammonite, strictly speaking, refers to the fossil shells of ammonites, whether they are gem-quality or not.

The ammonite is a very powerful shell, and this has a lot of meaning in Chinese culture – the Chinese have always regarded shells as successful generators of fortune and luck, able to attract prosperity and riches. It is for this reason that Ammonite has a very high place in Feng Shui.

Ammonite shells, because they have been underground for countless centuries, are believed to be full of knowledge about the Earth’s universal energy that they managed to soak up while buried. The wearer of the Ammonite pendant will be benefited in countless ways, achieving a state of wellbeing and self-illumination.

When worn, the Ammolite pendant is believed to stimulate the constant regeneration of good chi within the body – this is said to decrease the number of toxins in the blood, creating clarity of mind and decreased illness odds. It is also said to allow for increased intelligence, creativity, and leadership.

*Comes with a free 925 silver necklace

* This is the exact piece you are going to receive