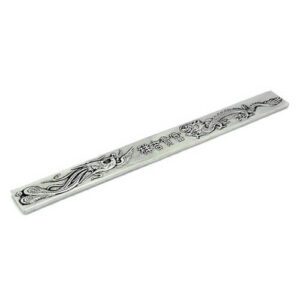 This beautiful paperweight consists of a silver plate intricately embossed with the image of a Dragon and Phoenix with the Chinese characters Fu Gui Qi Xiang.

The Dragon and Phoenix are two of the four celestial animals and are very important and powerful symbols in Feng Shui. The dragon symbolizes Yang and Phoenix symbolizes Ying. The Dragon denotes power, authority, wealth luck and is able to imbue you with authority luck, and social status. For the Phoenix, it is believed to bring incredible turnaround good fortune to those who had previously suffered from bad luck. They are the perfect couple and they support and complement each other as only true life partners can. When the Dragon and the Phoenix are depicted together, they symbolize the perfect Yin and Yang symbol, a pair of lovers that are connected for all of eternity, a happy marriage that is blessed with success and prosperity as well as many filial children.