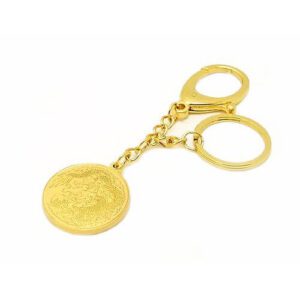 The Dragon Enhancing Amulet stimulates the mighty Dragon’s energy to bring protection and prosperity luck all year round.

This is a beautiful Dragon Enhancing Amulet comprising a gold plated medallion featuring the mythical and majestic Chinese Dragon, one of the four celestial animals, while the reverse side has the Four Heavenly Kings. The heavenly Dragon shown clutching the pearl globe brings success and auspiciousness especially in the Year of the Dragon. Meanwhile, the Four Heavenly Kings protect you against evil intentions or negative stars from all directions.

The Dragon, long revered for its supernatural powers and strength, is one of the most important and powerful symbols in Feng Shui. It represents the ultimate ‘Yang’ energy, male vigor, courage, and bravery. In Chinese culture and Feng Shui, the Dragon being the most auspicious and magnanimous has become the ultimate symbol of power, abundance, good luck, and honor. This legendary Guardian of the Eastern Skies is said to create the precious cosmic Chi known as the ‘Sheng Chi’ which brings good fortunes into our homes and workplaces, making it an all-rounder bringer of prosperity, good luck, and success. It is a powerful cure and enhancer for business luck, bestows foresight and wisdom, brings honor, protects, and paves the way for more achievements and success in the coming years. Additionally, this item is also ideal for the Rooster born (secret friend) as well as those whose zodiac signs are the Rat and Monkey (horoscope allies).

The Four Heavenly Kings (Si Da Tian Wang in Chinese), is the celestial beings that protect the four cardinal directions of the world. Also known as Dharma Protectors by Mahayana Buddhists & as Deva Kings in Sanskrit by the Hindus, they are widely venerated as temple guardians and protectors of the nation in China and Japan. The four kings are usually depicted holding personalized weapons that have supernatural powers and are alert, tireless & ready to protect the Universe against attacks by the evil forces & spirits of the four directions.

In Feng Shui, having an image of the Dragon is always auspicious, more so when it is a Dragon Year. Thus, besides being a lovely accessory, the Dragon Enhancing Amulet stimulates the mighty Dragon’s energy to bring protection and prosperity luck all year round whilst the Four Heavenly Kings protect against malevolent attacks that may be aimed at you. Made from high-quality metal, it also acts as a formidable cure to weaken the earth energies of the malignant #2 Black and #5 Yellow flying stars. Dangle it on the rearview mirror of your car or clip it onto your bag or anywhere you like. Keep it close to you at all times for peace of mind and be pleasantly surprised by the good fortune, prosperity, harmony, and happiness flowing into your life.

Check out our wide range of Auspicious Amulets and Feng Shui Key Chains for protection and blessings.