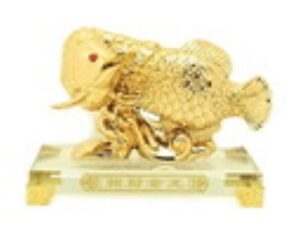 Golden Arowana with Scales of Coins

The powerful and auspicious energy of the Arowana will bring you wealth, success, good luck, and abundance.

This is an absolutely auspicious gold-colored Dragon Fish Arowana with its scales designed as Chinese coins. Unlike most other Arowana figurines, this one is depicted looking back as if on the lookout for more fortunes. It has a gold coin in its mouth and sits on an elegant base bearing the characters 招 财 金 龙 – Zhao Cai Jin Long which means “wealth attracting Golden Arowana. A potent energizer of wealth and abundance, this exquisite Golden Arowana Fish would add significantly to the symbolism and auspiciousness of both your home and office.

Display the Golden Arowana with Scales of Coins on your work desk, in the center of your home, in your lucky/best directions based on the 8 Mansions Theory, in the wealth (South East), career (North), or mentor (North West) sectors (refer to the Pakua Trigrams Theory) or even as a metal cure (by virtue of its gold color) for the earth afflictions brought by the #2 Illness and #5 Wu Wang stars. (Find out more about Flying Stars here). Besides being a magnificent showpiece, the powerful and auspicious energy of the Arowana will bring you wealth, success, good luck, and abundance.