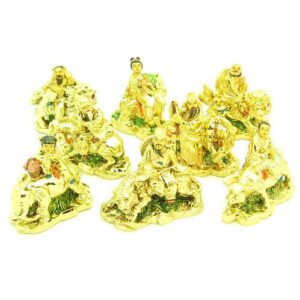 The Golden Eight Immortals on Auspicious Animals makes the perfect gifts for anyone with strong ambitions and big goals in life.

This is a beautiful set of golden eight immortals depicted holding their magical objects and sitting on auspicious animals.

Legend has it that the Eight Immortals were sent down from heaven to assist and guide mortals in achieving their goals and ambitions. They bring good fortune, good descendant luck, good education luck, longevity, wealth, and fame. Each of the 8 Immortals will guard one of the eight directions and hence ensures all-around good feng shui. Having this absolutely stunning-looking Eight Immortals with Auspicious Animals in your office or home will ensure you have their backing in your endeavors, not to mention catching lots of admiring eyes.

The Golden Eight Immortals on Auspicious Animals makes the perfect gifts for anyone with strong ambitions and big goals in life. They can be placed in any direction in your home or workplace.

1. Display figurines of the Golden Eight Immortals on Auspicious Animals in East part (Health and relationship corner based on (Pakua’s 8 Life Aspirations Theory) of a room where everyone in the family members usually gathers together such as the living room or dining room. This will bring good health, abundance, and happiness to everyone.

2. Place the Golden Eight Immortals on Auspicious Animals in your personal Sheng Chi corner of your office based on your Kua Number (8 Mansions Theory) to generate good fortune and provide protection.