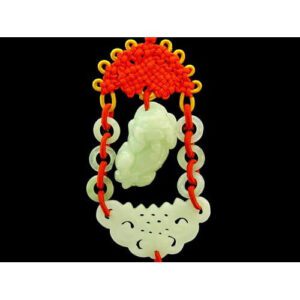 This Jade Feng Shui Pi Yao Imperial Tassel is an extremely powerful symbol that will help to appease the Grand Duke Jupiter.

An exquisite imperial tassel featuring a jade Pi Yao pendant tied with beautiful knots and decorated with jade rings and a medallion.

The Pi Yao is a mystical creature that is a particularly powerful and auspicious creature of good fortune adored by many because of its very protective, obedient, and loyal nature. The Pi Yao will always try its best to protect its owner from harm and injuries and to fulfill its owner’s wishes, especially in material and wealth gains.

Jade has been used and much sought after in Chinese since 5000 b.c. because of its beautiful color and surface, as well as its protective and healing powers. In Chinese tradition, jade symbolizes the five virtues of humanity: wisdom, justice, compassion, modesty, and courage. It is considered a very lucky stone and frequently worn as an amulet. Psychologically, it calms, counteracts prejudices, and gives its possessor a sense of justice and contentment.