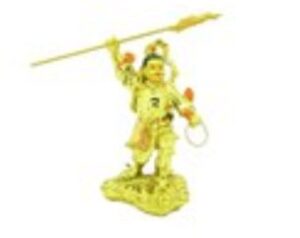 Place this Na Cha The Great Fighter of Injustice in your living room or office facing the entrance to ensure justice prevails and to keep people with ill intentions from harming you.

For 3000 years, the flying deity Na Cha has been a household name in China. According to Chinese legend, Na Cha is a young deity who was carried in his mother’s womb for 3 years, which explains some of his “father’s” hostility towards him. One day Na Cha escapes his rather sheltered home compound and learns that life is not as easy for everyone else as it is for him, that in fact injustice and mistreatment at the hands of the government and the aristocracy are all the common folks have to look forward to. This newfound knowledge gets him into all sorts of trouble with his father who is first in line when it comes to abusing the less fortunate in this district. It also gets him into trouble with the Ocean God whose son he winds up killing. In order to appease the Ocean God and his own father as well as to save the peasants whom the Ocean God has threatened to drown, Na Cha commits suicide.

But this is just the beginning! There are more demons and dragons and a helpful god who resurrects Na Cha and gives him the chance to right wrongs and fights for justice, which he does by flying through the air on flaming wheels and smiting evil-doers with his magic fire tipped spear, ring, and Wind Fire Wheels! Now a force to be reckoned with, Na Cha sets his sights on challenging the tyranny of the Ocean God.

Place this figurine in your living room or office facing the entrance to ensure justice prevails and to keep people with ill intentions from harming you.