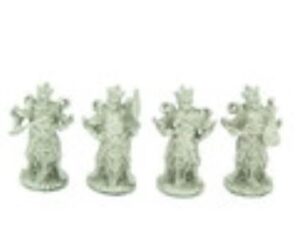 Invite the Four Heavenly Kings into your homes to afford protection against pernicious attacks that may be aimed at you.

The Four Heavenly Kings are the remarkable beings that protect the four corners of the world. In Chinese Buddhism, they are popularly known as the Great Dharma Protectors, seen in the shrines of the Maitreya Buddha. The Four Heavenly Kings have the power to control the weather and climate on Earth. They each carry a distinctive magical weapon that represents the source of their supernatural powers. When you invite these images into your homes, they are said to afford protection against pernicious attacks that may be aimed at you.

Two of the Heavenly Kings have friendly faces and fair-colored complexion. The other two show a more ferocious and darker appearance. This represents that the GOODNESS in this world must be taught and implemented both through gentle and authoritative means.

Mo Li Hung – Guardian of the South – this king carries a spear and a precious magical sword which produces a million spears that pierce through the bodies of evil nagas reducing them to dust.

Mo Li Hai – Guardian of the West – this king has broad eyes. He carries a snake in one hand and a pearl in the other.

Mo Li Ching – Guardian of the East – this king has a fierce face and a beard. He carries a four-string mandolin, when strummed will deafen the evil spirits.

Mo Li Shou – Guardian of the North – this king carries a magic umbrella with supernatural powers that protect against thunderstorms.

Place the Four Heavenly Kings near the front door facing the main entrance to protect your home or office from evil influences and negative Chi. They should be in full view of anyone entering the home. With the strategically displayed in the home or office, these Four Heavenly Kings will prevent its residents from engaging in activities that cause the accumulation of negative karma. Honesty and good deeds will always prevail in all your dealings and relationships.

Like any other deities, do not place them on the floor.