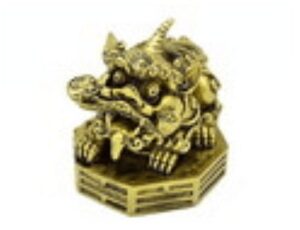 Place the Pi Xie on Pa Kua with Ruyi at your work desk or reception counter to attract good fortune.

This is a Pi Xie figurine made from polyresin and finished with golden brass color. The Pi Xie sat on a Bagua base and biting on a Ru Yi Sceptre. Pi Xie’s are lovely to own by those seeking to ward off bad luck, to appease the Grand Duke Jupiter (Tai Sui), and to increase your money opportunities. On the other hand, Ruyi is a symbol of power and authority in Feng Shui often used to enhance authority, to invite luck, and to ensure smoothness in business pursuits. Last but not least, the Pakua is an excellent symbol that deflects negative energies.

What the Pi Xie symbolizes and how to use this symbol to enhance your Feng Shui:

The Pi Xie or Pi Xiu is a mystical creature, a variation of Pi Yao that is a particularly powerful and auspicious creature of good fortune adored by many. It is said to have a voracious appetite for precious stones and jewels that is infinite. The interesting part is that the Pi Xie does not have an anus, which means things only go in but never come out. Due to this reason, it has therefore become a favorite must-have for businessmen and merchants wishing loads of money rolling in without spilling out a dime. It is no wonder that Pi Xie can often be seen in banks, casinos, foreign exchange markets, and finance companies in Oriental countries. One can often see Pi Xie being worshipped and offered with incense and flowers in business premises in countries like Thailand to attract sales.

Besides that, the Chinese adore the Pi Xie because of its very protective, obedient, and loyal nature. It is believed that the Pi Xie will always try its best to fulfill its owner’s wish and protect its owner from injuries. Because of these capabilities, smaller versions of Pi Xie are often worn as an amulet or carried in one’s bag wherever one goes. Many stories have been told where victims of car accidents or robbery assaults surprisingly escaped the ordeal unharmed and found out later that their Pi Xie amulets they were wearing or keeping had mysteriously broken into two or damaged. It is said that their Pi Xie had sacrificed themselves to protect their owner. Treat your Pi Xie like it’s a real pet. Talk to them, pat them, rub them… a happy Pi Xie will go the extra mile to grant your wishes!

Here are other ways you can use the Pi Xie to Feng Shui your way to a better life.

1. You should place a Pi Xie if you have just moved into a new home or renovated or carried out building work or are having a run of bad luck. Display this figurine anywhere in your living room to overcome bad luck and potential mishaps.

2. Many believe placing lottery tickets under the Pi Xie will bring good luck.

3. Place the Pi Xie at your work desk or reception counter to attract good fortune and protection from people with bad intentions that may cause physical harm. Having a pair of Pi Xie in your business premises will ensure prosperity and good sales. In your living space, they ensure you will never run out of money.