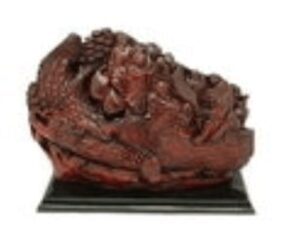 Having the Red Stone Eight Immortals on Mountain in your office or home will ensure you have their backing in your endeavors, not to mention catching lots of admiring eyes.

A truly beautiful craft with the images of the Eight Immortals living on a mountain. Carefully carved from one-piece resin with red stone color. Legend has it that the Eight Immortals were sent down from heaven to assist and guide mortals in achieving their goals and ambitions. Having the Red Stone Eight Immortals on Mountain in your office or home will ensure you have their backing in your endeavors, not to mention catching lots of admiring eyes.

What the Eight Immortals symbolizes and its Application in Symbolism Feng Shui:

The Eight Immortals are superior beings worshipped by Taoists and widely regarded as symbols of longevity and good fortune in Feng Shui study. Comprising six men and two women, legend has it that they were sent down from heaven to assist mankind in their time of need and achieve their ambitions and aspirations to gain good wealth, fame, health, and knowledge. Each immortal possesses a tool of power that can perform supernatural magic. The symbolic presence of the Eight Immortals in your home is believed to bestow good health, happiness, and good fortune on every member of your family especially in this Period 8.

1. Display figurines of the Eight Immortal in East part (Health and relationship corner based on (Pakua’s 8 Life Aspirations Theory) of a room where everyone in the family members usually gathers together such as the living room or dining room. This will bring good health, abundance, and happiness to everyone.

2. Place the Eight Immortals in your personal Sheng Chi corner of your office based on your Kua Number (8 Mansions Theory) to generate good fortune and provide protection.