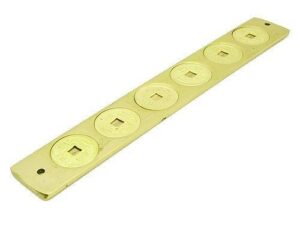 Hang this Six Emperor Gold Coins Ruler in the Northwest sector of your office to activate mentor Luck or in the North to enhance career luck.

This is a metal ruler with six emperor coins attached to it. The emperor coins bring prosperity, good luck, and wealth into the household.

Hang this Six Emperor Gold Coins Ruler in the Northwest sector of your home or office to activate mentor Luck or in the North to enhance career luck based on the Pakua’s Eight Life Aspirations.

For Flying Stars enthusiasts, mount it on either side of the door where the malignant Five Yellow Star flies into. The coins will act as an effective cure against the Five Yellow which instigates fights, accidents, and death.

What the Chinese Coin symbolizes and its Application in Symbolism Feng Shui:

Chinese Coins have always been a popular symbol of wealth and prosperity in China. Chinese coins are round with a square hole in the center. The combination of a square hole on a round coin represents heaven and earth, and when used correctly, they can be extremely powerful Feng Shui symbols in attracting the luck of both heaven and earth. In ancient China, scholars believed the coins were very powerful in attracting wealthy luck that they were worn on their sons as good luck amulet. When coins are combined with another auspicious symbol like Chi Lin, mongoose, the tortoise, or the dragon, it is said that wealth and success will multiply a thousand times.

Old Chinese coins or modern reproductions are wonderful symbols of prosperity and extremely popular in the application of Feng Shui today. They can be placed in your handbag, wallet, or work files or attached to account books, share portfolios, computers, or telephones to enhance income and wealth luck. Red or gold threads or ribbons are often used to tie them together since it is believed to activate and release the energies of the coins.

Coins, with intrinsic metal energies, are most potent when they are placed in the West, Northwest, and North sectors.

Always display them with the Yang side facing up. The Yang side has four Chinese characters whereas the Yin side has two.