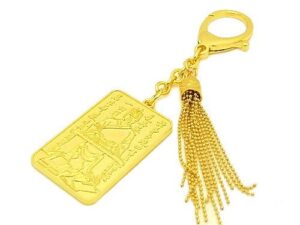 This Tai Sui Amulet is specially designed for protection from the wrath of the Grand Duke Jupiter in 2014.

This Tai Sui Amulet is specially designed for protection from the wrath of the Grand Duke Jupiter in 2014. The front of the rectangular gold medallion features the image of General Zhang Ci (章词), the Grand Duke who takes charge of worldly affairs in 2014. The reverse side is inscribed with a powerful talisman to appease the Tai Sui.

Tai Sui or also known as the Grand Duke Jupiter is widely respected and paid attention to by the Chinese. Each year, the Chinese will identify his location in the home/working premises so as not to inadvertently disturb him. An offended Tai Sui will bring you misfortunes, from mild to severe kind. It is also important to check if your horoscope sign is in direct conflict with the Grand Duke of the year. In 2014 those born in the years of Horse, Rat, Rabbit, and Rooster are either directly or indirectly confronting the Tai Sui and must have this protective talisman. However, it is highly recommended for everyone to carry one even if your horoscope sign is not in conflict, directly or indirectly with Tai Sui because you may unknowingly sleep or sit facing him, which will also incur his wrath. Better be safe than sorry!

Use the Tai Sui Amulet 2014 as a key chain or clip it onto your handbag, briefcase, or car rearview mirror to make sure it is always near you to be blessed with peace, protection, happiness, and prosperity.

Click here to view other selections of Tai Sui Appeasers for protection and blessings.