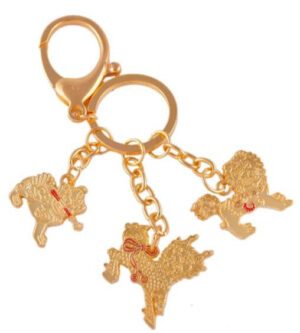 The 3 Celestial Guardians Keychain Amulet is the most effective for the 3 Killings and is recommended by most Feng Shui masters.

This is a striking feng shui keychain comprising of the Three Gold Plated Celestial Guardians strung onto a large gold ring, with their respective powerful weapons ( Fu Dog-Hook, Chi Lin-Lasso, and Pi Xie-Sword) accented in red. The Fu Dog carrying a hook to protect against harmful intentions, Chi Lin carries a lasso protects against loss of relationships, and the Pi Xie with sword protects against loss of wealth. The 3 Celestial Guardians are the most effective for the 3 Killings and are recommended by most Feng Shui masters as the best cure to suppress this hostile energy.

The Chi Lin, also known as Dragon Horse, is the Chinese Unicorn, a legendary creature with the head of a dragon, scales of carp upon the body of a horse, and a tail consisting of little curls. The Chi Lin’s presence is said to attract the powerful cosmic breath of the dragon, which promises good omens, wealth, success, longevity, wisdom, compassion, and distinguished children. The magnificent Chi Lin is believed to have great protective abilities.

Fu Dogs are mythical animals and guardians of the heavenly gate. They have fear-inspiring faces and muscular bodies and are believed to be protectors that ward off evil influences and spirits. It is their task to probe the mind and intentions of the entering guest. The Fu Dogs also nourish Chi that enters the home or business premises and thus brings in good fortune.

The Pi Xie is a mystical creature that is a particularly powerful and auspicious creature of good fortune. Chinese adore the Pi Xie because of its protective, obedient, and loyal nature. It is believed that the Pi Xie will always try its best to fulfill its owner’s wish and protect its owner from any harm. Pi Xie also has the ability to help anyone having bad Feng Shui due to having offended the Grand Duke Jupiter (Tai Sui).

The metal makes of this item also doubles it as a formidable Metal Cure to weaken the malignant #2 Black and #5 Yellow Stars.

This special amulet combines energies from three powerful symbols to guard you against those with bad intentions, untoward incidents, and hostile situations. Hang it on or pop it in your bag. Dangle it on the rearview mirror of your car so that this powerful guardian is always there with you, to protect you from harm, misfortune and bring you good luck.